When is Ground not Ground?

A while back I was working entertainment tech for a small convention, I was the Sound Designer and had inherited the Power Design (usually done by the Lighting department, but we did not find a Lighting Designer until very late). The event was held at a hotel with a 4-section ballroom, call the sections 1, 2, 3, and 4. The stage was set in section 4 and we had a social event in sections 1 and 2 on Friday night with the airwall between 2 and 3 in place. After the social event the airwall between 2 and 3 was struck and the airwall between 1 and 2 was installed. For the remainder of the weekend events were on the stage in section 4 with audience in sections 2 and 3 and section 1 was the performer Green Room.

100A of 3-phase 120v/208v power gives us 300A of single phase 120v power, but for safety I derated to 80% or 240A. I built the power budget and came out to just about 230A. I assembled my equipment (PDUs) and cable (cam-lock feeders, as well as NEMA 5-15 extension cords) to handle all our needs assuming we were getting all our power from feeder C near the stage.

When we arrived on Friday morning we discovered that feeder A and C were not 100A, but only 80A. Feeder B was 100A, but if we used it, then we would end up with a PDU in a bad location due to cable lengths. Feeder A and C both came from a power panel in the kitchen behind the ballroom. Feeder B came from a different panel further back in the kitchen, and that panel also fed the panel that fed A and C. Like this:

We contacted Hotel Engineering and they apologized for getting us bad information. They offered to let us use as many of the different power feeds that we needed to, at no extra cost, to get the job done.

We were not comfortable using just the 80A feeder C as we were very close to that total draw and rather than use feeder B and have a PDU badly located, and against my better judgement, we decided to split the power between feeder C (for the stage) and feeder B (sound and lighting control points and video production control all at the back of the room). We knew where each feeder came from, we knew how the panels tied together, what could go wrong?

Friday night, after the social event, we started setting up the sound and lighting control riser; the video crew started building video production control on the other side of the room. I was the first to tie the two power feeds together when I plugged the mixer outputs into the snake feeding the FOH amp rack. As soon as the connectors mated I heard a hum out of the mains. I immediately know what was going on. I called the crew together and told them we had a serious difference between safety grounds between feeder B and C. One of the crew grabbed a 100′ 12/3 extension cord and ran it diagonally across the room from feeder C to the sound board. We measured over 100mV between the safety ground pins. We assumed there was a wiring fault somewhere between the panels and feeders.

So what do we do now? The first thought was to use a bonding conductor to tie the two safety grounds together. We tried connecting the ground pin of that extension cord to the ground pin of the power from feeder B. That reduced the hum by about 20 dB, but it was still clearly audible. It was clear that we could not get a low enough impedance connection with the 12 AWG power cords we had with us.

We ended up, at midnight, redesigning the power distribution based on the parts we had on hand. We used feeder B since it could carry our full load. One of the PDUs that we added to the order at the last minute combined with multiple sets of camlock T’s of various genders, enabled us to get power where we needed it.

When I asked on the Theatre-Sound List  for suggestions of software tools that permit playback of sound cues for Theatre, I received lots of suggestions. I was asking specifically about tools that work under Windows. My primary laptop runs Mac OS and I use QLab from Figure 53, but I have a secondary laptop that runs Windows and I wanted to put it into service for playback as well. I occasionally run into situations where I need my primary system, but also have a gig needing playback. So I gathered together all the suggested products (and a couple comments from folks) for reference.

A local community theater I volunteer at is having trouble with the main speaker cluster. I am one of two Sound Coordinators for this company, so I get called for problems.

Some background, the main sound system consists of a flown cluster of four speaker cabinets: a Main covering the bulk of the audience, a Front Fill (FF) covering the first 4 or 5 rows, a Subwoofer (Sub), and a Stage Monitor (SM) covering the vast majority of the stage. All are ElectroVoice EVF series speakers. The Main is a 15″ 2-way, the FF is a 12″ 2-way as is the SM, all are 90 degree by 40 degree. The Sub is a single 18″ driver. The crossover and house processing is handled by a Rane RPM-88 driving QSC RMX series amps. We are not currently bi-amp’ing the Main, FF, or SM cabinets, but that is the long term plan.

The other night I get a call from the current production’s Sound Designer (who is also the A1 Mixer) and his A2 Deck Sound. They tell me that the Main has distortion compared to the FF or SM. They swap various parts and narrow the problem down to the wiring, passive crossover, or drivers in the Main. I am out of town and can’t stop by immediately.

When I get back into town I stop by on a dark night (they are having auditions for the next show in the season so I can only make noise and work on things for about an hour). I capture the following response using the test oscillator built into the Soundcraft K2 FOH desk. I am using StudioSixDigital’s Audio Tools on my iPhone 5 with the built in microphone. 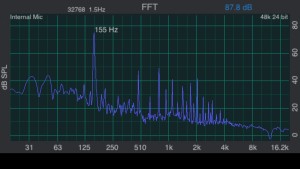 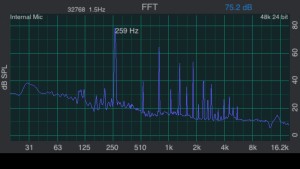 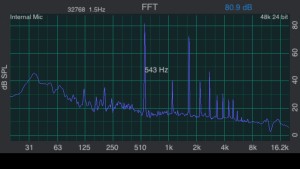 Just look at all those harmonics!

Just to sure I am not seeing some weird room effect (as I sweep the frequency I can hear the drums in the pit getting excited) I mute the Main and run the same tests on the FF, see below. 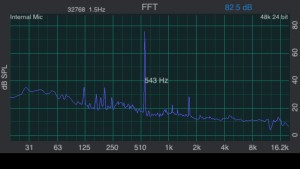 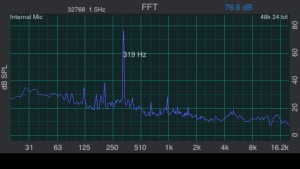 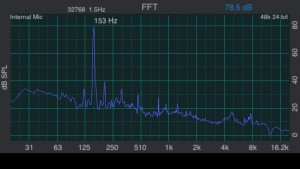 That is more like what I expect to see out of a loudspeaker in terms of harmonic content. Just to be certain the problem is with the 15″ cone and not an amp channel I test the horn in the Main. 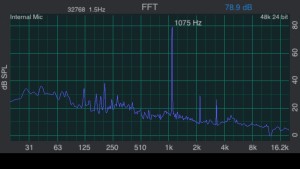 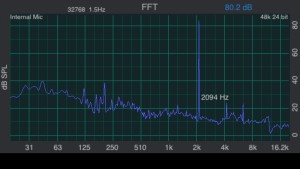 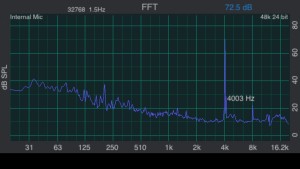 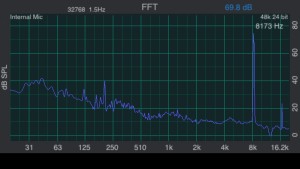 That all looks reasonable.

So I am thinking that we damaged the 15″ cone at some point. This is the first show that has noticed any issues and is the second production of this season. So something happened in the past few weeks to degrade that driver.

I will continue to update this post as we learn more. We can’t get up to the speaker until after this production closes in another week.

While I had my phone out and the FFT running I stopped in the Equipment Room and grabbed this spectrum. This is with all the gear running but the fans in the lighting dimmer packs were not running as there were no theatrical lights in use. 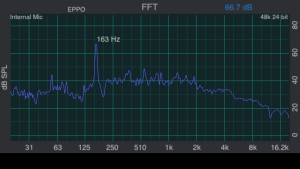 I also sat in the middle of the house (it only seats about 250) and grabbed this spectrum of the noise floor. 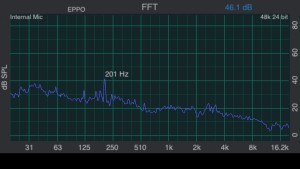